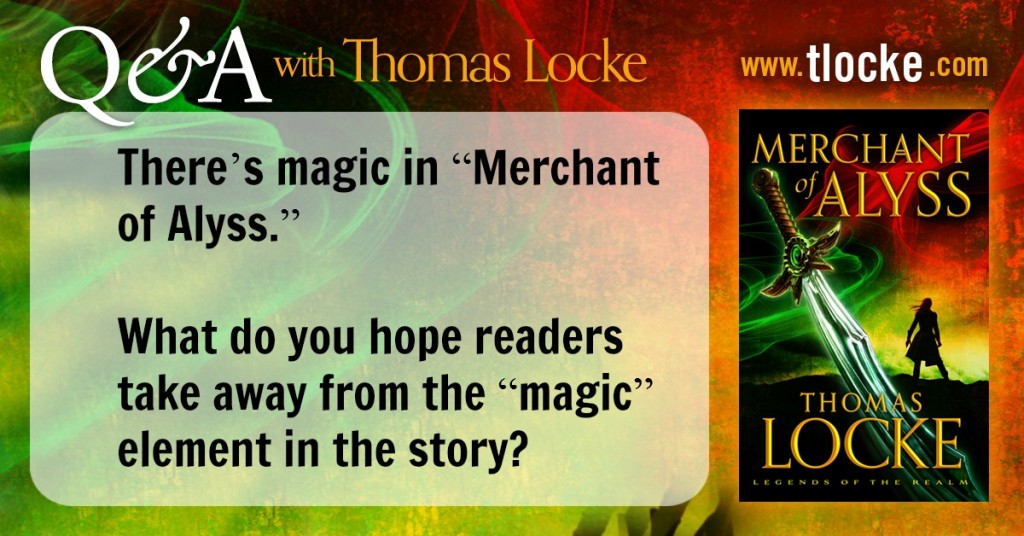 Q: There’s magic in Merchant of Alyss. What do you hope readers take away from the “magic” element in the story?

Thomas Locke: The issue of using magic was something I grappled with for some time. I found immense guidance from the works of C.S. Lewis and J.R.R. Tolkien.

Four thousand years ago, when the concept of “epic” fiction originated, there was a specific purpose behind stories where magic and mythical beasts played major roles.

The Greeks sought to create worlds that were bigger than life, with challenges and obstacles that were completely and utterly beyond the reach of mortal man.

The authors sought to portray through story that a normal human being can grow beyond the impossible challenges of life. They wanted to show normal people, with flaws and weaknesses as great as those we all carry today, can in fact rise up. They can triumph.

That is what I seek to do with the Legends of the Realm series. I want to return to the original aims of fantasy fiction. I want to re-insert the concept of heroic struggle, and challenges greater than life, and triumphs over evil and darkness.

“Challenges greater than life” is aim of Thomas Locke’s Legends of the Realm fantasy series.

“Normal people can, in fact, rise up. They can triumph.” -Thomas Locke, author of MERCHANT OF ALYSS

2 Responses to “Q&A: How I grappled with using magic in ‘Merchant of Alyss’”