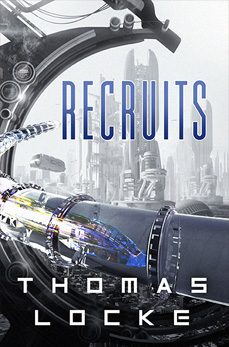 From the infinite imagination of Thomas Locke comes this otherworldly new series that will challenge young readers’ understanding of time, space, and human limitations.

It’s a world they’ve seen only in their dreams—until now.

Twins Sean and Dillon Kirrel have dreamed about a world beyond their own since they were children, but it has always been a fantasy. Not long before their eighteenth birthday, however, the arrival of a mysterious new neighbor and the revelations he shares bring that far-off world within reach.

When Sean and Dillon learn they share a unique gift—the ability to transfer instantly between worlds—they are offered an opportunity to prove themselves as recruits to the planetary Assembly. But unlocking their abilities awakens an enemy beyond anything they ever imagined, thrusting them into an interplanetary conflict that could consume the entire human race.

For more than a decade, twins Sean and Dillon Kirrell have felt pulled toward another world–a place they have sketched out in detail and posted on the walls of their bedroom. They are certain it is out there.

Not long before their eighteenth birthday, they are approached by a clandestine scout. To him, Earth is just a distant and unmonitored outpost of human civilization. But he explains that Sean and Dillon share a unique gift–the ability to transfer instantly from place to place.

Transitors who are also twins are especially rare, and so they are offered an opportunity to prove themselves as recruits to the human assembly.

If they don’t succeed within thirty days, their minds will be wiped. Either they make the grade as inter-planetary travelers—or this never happened.

“Recruits is a truly awesome work that holds the potential for appeal across genres and age groups. Enormously engaging and thought provoking. The concept itself is remarkable, and the writing is absolutely beautiful.”
—Kim Neimi, former executive vice president, NBC Universal

“Recruits is mind-bending storytelling, part The Matrix and part I Am Number Four. The story holds to a remarkable combination of the immediate and the beyond. This forms an adventurer’s feast of the most addictive sort.”
—Tosca Lee, New York Times bestselling coauthor of Forbidden

“Wow! Recruits is a remarkable feat, combining adroit storytelling with a delicious mixture of the now and the fantastic. Locke’s writing shows a wonderfully fluid grace. The story brings to mind the poignant beauty of Arthur C. Clarke’s best novels, as well as such modern works as Avatar.”
—Phyllis Tickle, former senior editor, Publishers Weekly