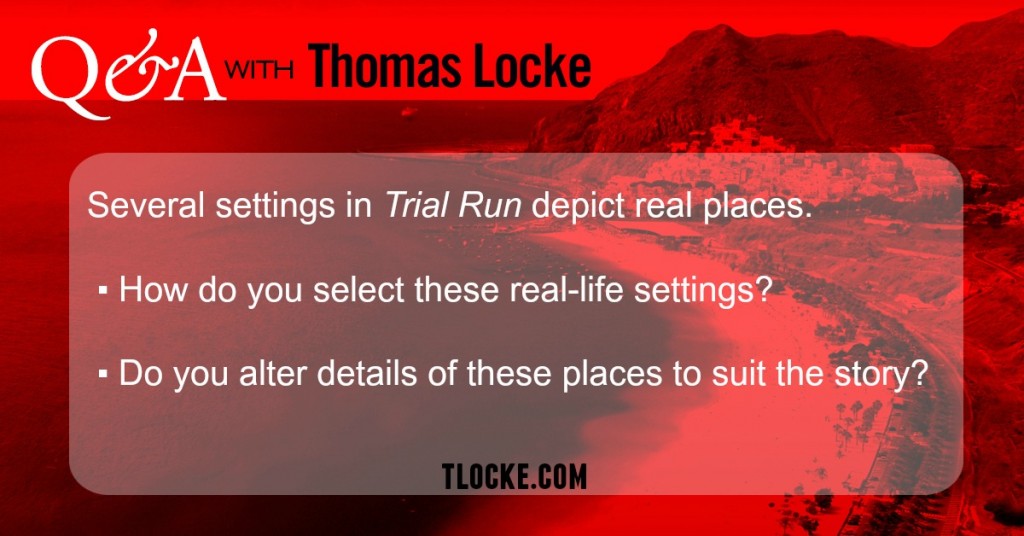 Q: Several settings in Trial Run (Santa Barbara, CA, the Italian/Swiss border site) depict real places. How do you select these real-life settings for your stories, and do you alter details of these places to suit your stories?

Thomas Locke: When John Grisham published The Client, a number of readers wrote in to say that he had shifted Washington DC’s geography in several crucial ways. John actually responded in the Afterword to his next novel, saying that it was his right as an author of fiction.

I won’t go that far, but I will say that I researched the area in California where much of the story is set.

For many people, the ‘take’ that I finally use in the story does not jibe with what they like to see as valid for a particular setting, especially when that place is close to their heart and I have used a more negative perspective. But the facts have been carefully studied.

An example from Trial Run is Santa Barbara. For a lot of people who know and love California, this is their absolute favorite place in the SoCal region. And for good reason. It is a lovely town, one my wife and I really enjoy visiting.

For this story, I was granted an insider’s view into the University of California at Santa Barbara, or UCSB. And from the perspective of many students enrolled there, UCSB is filled with hyper-inflated SoCal egos.

The contrast I found between the students with money (and in SoCal, when I say they had money, I really mean they had money) and those who don’t is as sharp as anywhere I have ever been. The student who formed my core source and guide was on a scholarship. He was there to study. He was, to say the least, in a minority.

Everything I described about the school, the bicycle traffic and the events on the beach and the housing, are based on observation. But the perspective was based upon the humorous bafflement with which this student viewed many of his fellow classmates.

I personally love this aspect of building a story. The research at this emotional level grants me the opportunity to see the world through another person’s eyes and heart. Being trusted with this, time and again, is part of the miracle process that happens every time I start a new tale.

Does it bother you when an author takes liberties with real-life settings?

The core element of placing a story is research. -Thomas Locke

Also in this series:

One Response to “Q&A With Thomas Locke: Do you alter details of real places to suit the story?”