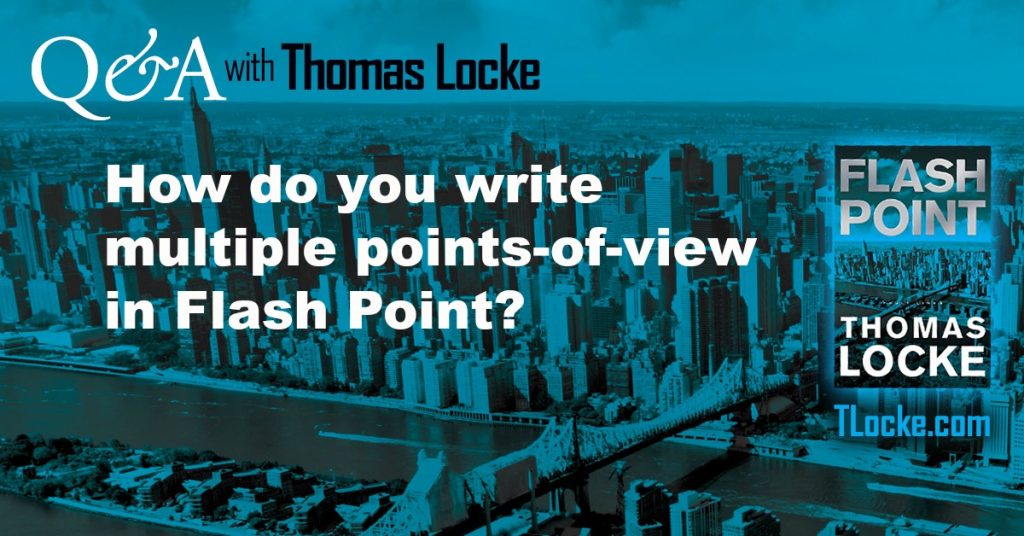 Readers often ask how I develop multiple points-of-view in a story. In this blog post, I’ll use Flash Point as an example, since it includes three parallel storylines (Lena’s, Brett’s, and Reese’s), which eventually intersect.

The real challenge for new writers in having a dueling point-of view (POV) is establishing clear and distinctively different characters.

It is not just that these people experience the events. Their internal differences are key to making this ‘real.’ They must have different emotional backgrounds, and actually see the events differently.

Think of a couple in a loving relationship. The fact that they desperately want it all to work, and love each other deeply, and are willing to make drastic changes to their life’s patterns, does not change the simple fact that they see almost every event that occurs to them both in completely different lights. This is based upon their emotional makeup and their backgrounds. The same thing must happen with characters.

If the author can do this, the result is a far deeper level of forward momentum and story tension.

In Flash Point, there are three distinct POVs—and part of what creates potency in the climax is how at the beginning of the story these characters are completely unconnected. Their aims are different, and their courses are separate from one another. Gradually, though, the plot draws them onto parallel courses.

Let me explain the role these three points of view play: 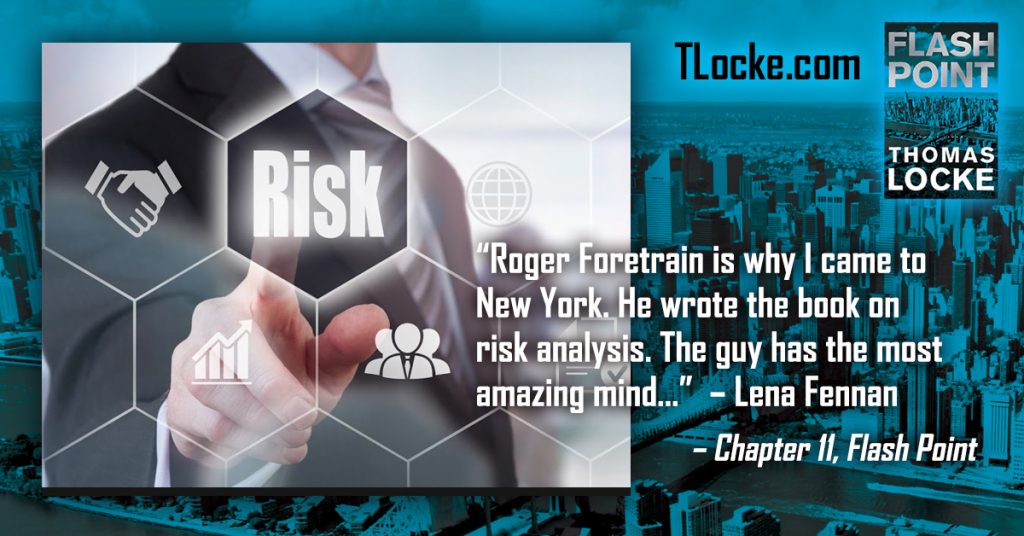 Lena is a Wall Street financial analyst, a brilliant woman whose entire life is thrown off track by this voice from beyond – HER OWN VOICE – now talking to her, offering not just suggestions but clear directions on actions that make no logical sense whatsoever.

This is my joy in early plotting: to place characters in situations that display their internal fault lines (thus, the title of this series: Fault Lines). Life does that to us all the time, and so there is an immediate resonance when it happens to a character. 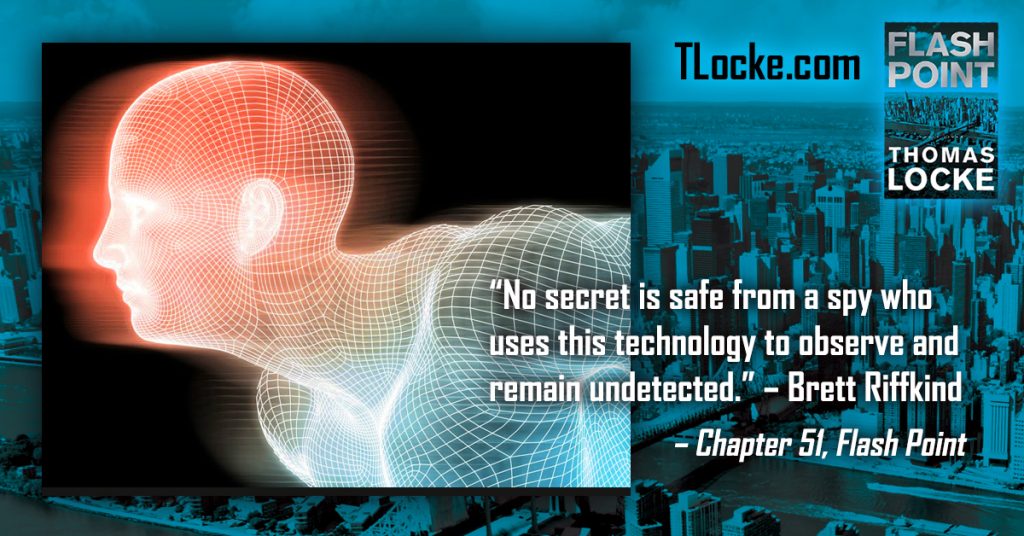 Brett was a bad boy. He sold out his team. He paid the price, almost died, was brought back by the man Brett disliked most in the world because he stole the girl Brett loved. Which was really the reason why Brett allowed himself to be lured by the dark side.

All this is universal. And in many cases, that is what makes for a great pivotal character. Pivotal here refers to a character that may be good, may be bad, but really is both.

In the book’s early scenes, Brett is doing penance. Nobody asked him to do this. He has no logical reason for it. But his life was effectively destroyed by all his wrong moves.

So he is serving others and doing the best he can to take nothing for himself. He does not see himself as moving beyond this stage. Which in many respects is the worst penance of all.

I have seen a number of such people in real life. They have gone to prison, they did the crime and the time, but upon release they are caught in a limbo that is at least partly of their own making.

What Brett does not realize is, the first scene of this book is intended as his release. And this creates the drama. The real hook between the audience and Brett.

This man has apologized in word and deed. He has readied himself. He does not know it yet, but he is about to launch himself, his love life, and his professional career, into high-altitude orbit. And take the audience with him.

Now, this is one bad lady. The reader knows it. And those who read Trial Run know Reese for what she is, a woman without a moral compass.

So the question here is, how to make a character that we can still care for?

And that is what the early scenes with Reese are all about. We know she’s dark, she’s bad, and yet we want secretly her to win.

When a character lacks moral compass, how do we make the reader care about them?

So many of the early readers of Flash Point have confessed that secretly they liked Reese best of all. That is what can happen with a successful anti-hero. They hold a magnetism that we would never allow ourselves in real life. But here we, the audience, can involve ourselves in a dark element in utter safety.

So where does this leave us? And this is the crucial element for strong story.

Once the central characters with POVs are established and their emotional realms are solid… once the audience is hooked in tightly… that is the point where we introduce THE FIRST INCITING INCIDENT.

Before this point, all the characters are SELF-DIRECTED. They go their own way.

Then something happens. Something big. An explosive event, or series of events.

And at this point, the characters are required to DECLARE THEMSELVES.

This is one of those points where a good story and reality no longer connect. But forget logic, folks. This is about creating a plot that the audience connects with at a visceral level.

At this first explosive moment, the characters are required to either be part of the solution – as in, working towards fulfilling the big climax – or they are opposed to it.

Before this point, they are selfish; they go their own way; they are not connected.

After this point, they may still be disconnected, but we begin to see how they are going to come together. How the climax will be shaped. What the big issue is, and on which side of the line each POV character stands.

This is the key plot element. Once you have the characters clearly drawn from the emotional level, the author is free to draw them together in an unexpected and explosive fashion.

Once characters are clearly drawn, the author can pull them together in explosive ways.

How I draft multiple POVs

When I draft a story, generally, I write through an emotion. Sometimes this is just one scene; other times it can be as much as a quarter of the entire book. Then I go back and fasten upon the emotion of the next character, and take that to the logical point of closure.

Multiple POV can work in every genre of story

So long as the emotional structure of the characters are strong and clearly different from one another, this technique works with every genre of story.

In my work with students, this technique can be extremely helpful. Through multiple POVs they not only learn how to create stronger characters, but also how to completely separate the story-telling from the story-TELLER. This tiny shift is elemental to making a story work.

At no point, at no time, may the story be told from the author’s point-of-view. The author cannot ever reveal himself or herself as the overseer.

All action, all emotions, all events, all tension, all explanations, every sentence and jot and comma and phrase. Everything has to be revealed through a character.

Multiple POVs separate the story-telling from the story-TELLER. –Thomas Locke