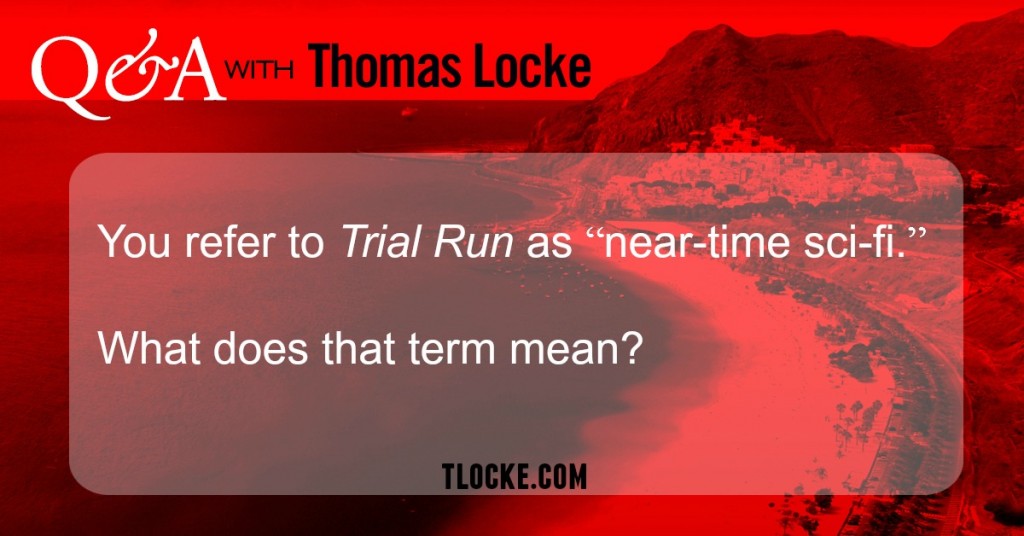 Q: You refer to Trial Run as “near-time sci-fi.” What does that term mean?

Thomas Locke: Near-time sci-fi is a story that takes place in today’s world, but one where reality is drawn around the unseen corner.

A perfect example is Jurassic Park, where dinosaur DNA is extracted from amber, inserted into frog embryos, and the monsters are returned to a modern earth setting.

Near-time sci-fi takes place in today’s world, but reality is drawn around the unseen corner.

Q: How did you adapt this concept for Trial Run?

For several years I served as marketing manager of a Swiss bio-pharmaceutical company. My primary markets were in Africa and the Middle East, and I traveled there extensively. Time after time I saw how healthcare and pharmacology were so deeply embedded with western viewpoints that we could not even redefine our approach to fit the patient’s needs within a different culture.

Nowadays there is a significant conflict raging within our own life sciences, especially human psychology and biology, bio-physics, and pharmacology. My earlier experiences have come to roost within my home culture.

Western concepts of healthcare and drugs and human testing all face cultural fault lines. Many conservative scientists and doctors feel their professional lives have come under threat. Others, however, believe these issues reveal a need to redefine the very concept of life sciences.

One example which formed a conceptual basis for Trial Run has to do with the changes in pharmacology. A group of scientists have recently begun work on what they term, “Coalescing Field Theory.” They propose that human beings, at their most elemental, are a pulsating energy charge.

This has created some serious heat. Traditional pharmacology is based upon the concept that human beings are essentially a series of carbon-based chemical actions and reactions. When these chemical processes are interrupted, human life ends.

The Coalescing Field Theorists say this is totally incorrect; all that happens is the physical shell ceases to interact with the larger physical universe. The core human entity simply changes from one state of awareness to another.

Is all human life interconnected by energy?

In essence, nonlocality states that at the quantum or subatomic level, the entire universe is interconnected. Any quantum entity, such as a single electron, can influence another entity, regardless of space and time. The effects are instantaneous, and can theoretically occur over any distance. At the quantum level, the speed of light is meaningless. In fact, it is theoretically possible for the effect to result before the event actually takes place. Coalescing Field Theorists use this concept of nonlocality as the basis to insist that all human entities are interconnected.

Trial Run’s appeal, in my opinion, is based upon the sort of visceral audience participation that drives such hits as the Harry Potter series and films like The Matrix. People return to these stories over and over because they want to claim this alternate reality for themselves.

This, to me, is a pinnacle of revelation: when the audience finds the concept so appealing they seek to replace their own reality with this new construct.

Also in this series: