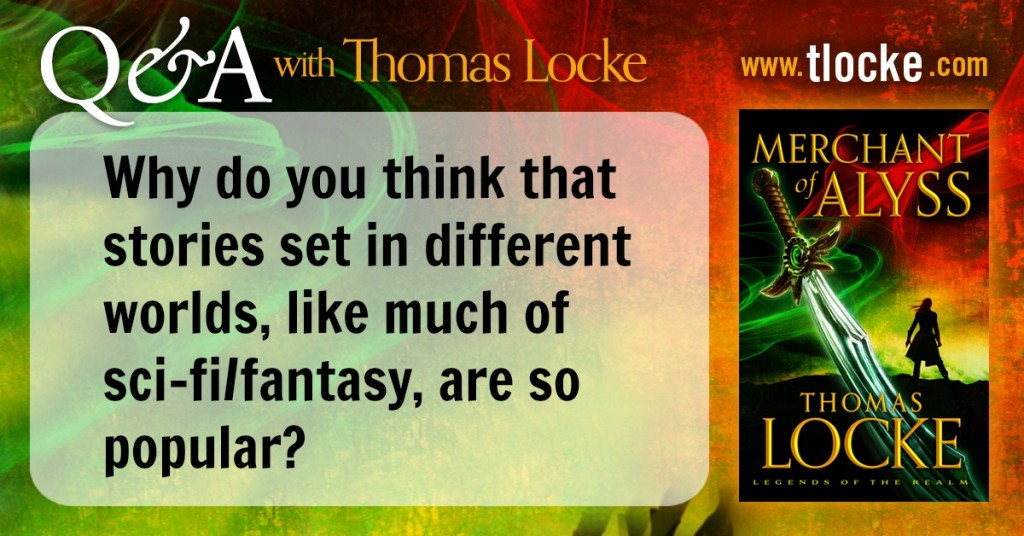 Q: Why do you think that stories set in different worlds, like much of sci-fi/fantasy, are so popular?

Thomas Locke: I believe the same reasons have been in place through the ages. People love fantasy and science fiction because it offers them an opportunity to reach beyond the limits of their reality. They come away from a good story with the sense that the unseen realms are almost within their grasp.

This re-interpretation of reality has its downside, however. Today’s young adults tend to see the world in negative terms: Things are not better for their generation than the ones which came before; the world’s problems are not being solved; the risk of economic collapse, political crisis, or even war is very real; environmental issues are being ignored; and so forth.

As a result, much of the science fiction and fantasy being written today reflects this dark perspective on the future.

There is an alternative.

In the early days of fantasy – we’re going back 4,000 years, to the original Greek epics – this kind of story represented a very different perspective. One with direct application to today’s world.

The Greek concept of democracy was under attack from within and without. The concept of personal freedom was being defined for the first time, and in doing so they threatened the concept of absolute rule in every neighboring kingdom. Their civilization, their very lives, were under constant threat.

The original Greek authors of fantasy saw their stories as a way to show how an average individual could overcome anything.

No obstacle, not even the worst beast they could imagine, not even the gods on Mount Olympus, could keep a determined and courageous individual from triumphing.

The key questions all these fantasies asked was: could the main character of the story overcome internal doubts? Could the character grow beyond personal weaknesses, and become the hero that the time of crisis required?

I feel that there has never been a time when such story concepts hold more importance than now, for today’s generations.